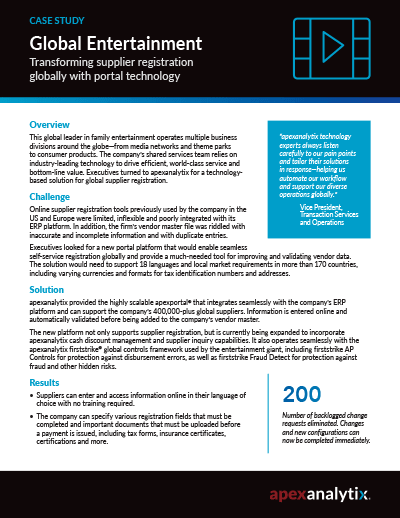 “apexanalytix technology experts always listen carefully to our pain points and tailor their solutions in response—helping us automate our workflow and support our diverse operations globally.”

Online supplier registration tools previously used by the company in the US and Europe were limited, inflexible and poorly integrated with its ERP platform. In addition, the firm’s vendor master file was riddled with inaccurate and incomplete information and with duplicate entries.

Executives looked for a new portal platform that would enable seamless self-service registration globally and provide a much-needed tool for improving and validating vendor data. The solution would need to support 18 languages and local market requirements in more than 170 countries, including varying currencies and formats for tax identification numbers and addresses.

apexanalytix provided a highly scalable portal that integrates seamlessly with the company’s ERP platform and can support the company’s 400,000-plus global suppliers. Information is entered online and automatically validated before being added to the company’s vendor master.

The new platform not only supports supplier registration, but is currently being expanded to incorporate apexanalytix cash discount management and supplier inquiry capabilities. It also operates seamlessly with the apexanalytix firststrike global controls framework used by the entertainment giant, including firststrike AP Controls for protection against disbursement errors, as well as firststrike Fraud Detect for protection against fraud and other hidden risks.