Are Your Audit Initiatives Keeping Up with Today's "Gig" Economy 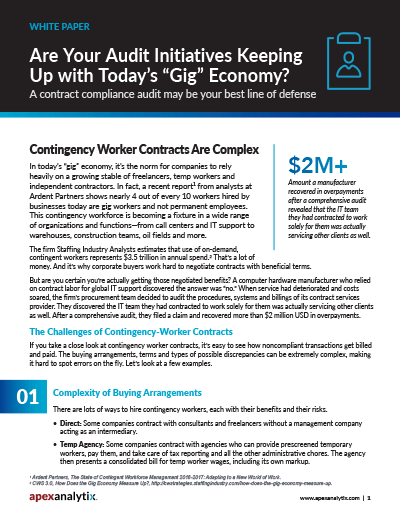 Are Your Audit Initiatives Keeping Up with Today's "Gig" Economy

In today’s “gig” economy, it’s the norm for companies to rely heavily on a growing stable of freelancers, temp workers and independent contractors. In fact, a recent report1 from analysts at Ardent Partners shows nearly 4 out of every 10 workers hired by businesses today are gig workers and not permanent employees. This contingency workforce is becoming a fixture in a wide range of organizations and functions—from call centers and IT support to warehouses, construction teams, oil fields and more.

The firm Staffing Industry Analysts estimates that use of on-demand, contingent workers represents $3.5 trillion in annual spend.2 That’s a lot of money. And it’s why corporate buyers work hard to negotiate contracts with beneficial terms. But are you certain you’re actually getting those negotiated benefits?

A computer hardware manufacturer who relied on contract labor for global IT support discovered the answer was “no.” When service had deteriorated and costs soared, the firm’s procurement team decided to audit the procedures, systems and billings of its contract services provider.

They discovered the IT team they had contracted to work solely for them was actually servicing other clients as well. After a comprehensive audit, they filed a claim and recovered more than $2 million USD in overpayments.

The Challenges of Contingency-Worker Contracts

If you take a close look at contingency worker contracts, it’s easy to see how noncompliant transactions get billed and paid. The buying arrangements, terms and types of possible discrepancies can be extremely complex, making it hard to spot errors on the fly. Let’s look at a few examples.

There are lots of ways to hire contingency workers, each with their benefits and their risks.

With each of these buying arrangements, there are embedded risks. When you buy direct, your ability to manage compliance can be impeded by the sheer number of contractual relationships. When you work with temp agencies, you likely will have little visibility into their systems and whether the bills you receive comply with contract terms.

When you use an MSP to manage multiple temp agency relationships for you, there is yet another layer between you, the agencies and the workers you are hiring, which can further heighten the opportunity for errors. Though most MSPs will use online vendor management systems as an administrative tool, client companies typically have limited visibility and are unable to drill down to evaluate all the parameters that can impact contract compliance. And since the MSP is paid a percentage of the billings as an administrative fee, there is little incentive for these companies to audit the subcontractors who are providing contingency workers to your business.

The errors can add up. A company in the oil and gas industry audited 10 of the third-party suppliers contracted through its MSP. Auditors discovered that many labor markup rates were miscalculated or contained inaccurate cost assumptions. They filed claims and recovered approximately $5 million USD in overpayments.

Not only are potential buying arrangements complex, but so are the many aspects of a contingency worker relationship that might be governed by your contract. That can make it hard to pinpoint noncompliant transactions before payments are made.

Here are a few examples of discrepancies companies often encounter when comparing contracts to what they’ve paid:

Though the various nuances of compliance can be hard to detect, it pays to dig deep and uncover them. When a global pharmaceutical company audited six of its contract labor providers, it discovered several were billing for paid time off when the hourly rate negotiated already included a premium for “paid time off” benefits. Auditors were able to recover about $1.5 million USD in noncompliant charges.

One reason is that people, process and resource barriers can stand in the way. Your company may be relying on manual processes or disparate systems that make it hard to consolidate and analyze information for global visibility. You may lack a centralized contract repository where you can quickly find documents and analyze terms. Organizational silos may keep information from flowing freely between your purchasing and accounts payable teams.

You may even lack the people and the budget for effective supplier governance and performance management. In fact, a recent survey conducted by Consero Group1 found more than 64 percent of chief procurement officers say they lacked resources to manage operations effectively.

Here are a few of the many steps included in the typical contract compliance audit workflow:

Companies who rely heavily on contingency workers have begun to make these contract compliance audits a continuous part of their operations—auditing several waves of suppliers throughout the year. As a result, they are able to catch errors sooner and mitigate their losses.

But there are additional benefits as well. You can use the data you uncover during a contract compliance audit to expose strategic opportunities—including new business models, opportunities to consolidate supply sources or to build stronger contracts. You also can align your company and key suppliers behind a common set of data so you can work in harmony from contract to purchase order to receipt to invoice.

Whatever you choose to do, don’t delay. With the rising demand for contingency workers, the time to act is now. Establish your contract compliance audit framework so you can capture losses and use what you learn about your suppliers, your spending and your processes to benefit your business well into the future.

To Find Out More

If you would like to learn more about contract compliance and the benefits of auditing your contingency worker contracts, contact apexanalytix at +1 800-284-4522.

Pete Erdner is the Vice President of Commercial Operations at apexanalytix and is responsible for the oversight, management, profitability and renewal of commercial audit engagements as well as adding value for clients in the form of recovered monies and enhanced internal controls. He is also instrumental in keeping commercial operations at the leading edge of the industry by driving the use of new technologies such as predictive analytics and robotics. Pete has been in Operations at apexanalytix for more than 18 years. Prior to joining apexanalytix, Pete’s career experience included public accounting, tax preparation and auditing. Pete holds a BA in Corporate Communications with a Business Administration minor from Elon University. Pete is also a Certified Public Accountant and a member of the AICPA, NCACPA, IIA and IAPP.

2 CWS 3.0, How Does the Gig Economy Measure Up?, http://cwstrategies.staffingindustry.com/how-does-the-gig-economy-measur....