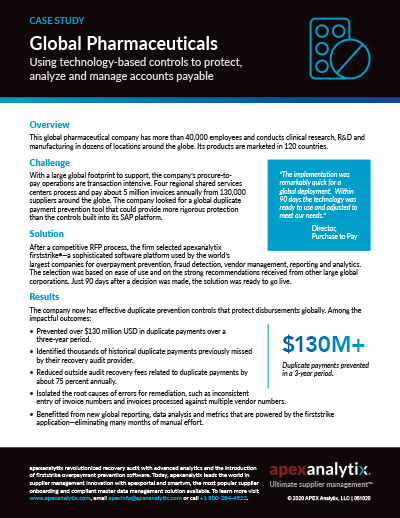 This global pharmaceutical company has more than 40,000 employees and conducts clinical research, R&D and manufacturing in dozens of locations around the globe. Its products are marketed in 120 countries.

“The implementation was remarkably quick for a global deployment. Within 90 days the technology was ready to use and adjusted to meet our needs.”

With a large global footprint to support, the company’s procure-to-pay operations are transaction intensive. Four regional shared services centers process and pay about 5 million invoices annually from 130,000 suppliers around the globe. The company looked for a global duplicate payment prevention tool that could provide more rigorous protection than the controls built into its SAP platform.

After a competitive RFP process, the firm selected apexanalytix firststrike®—a sophisticated software platform used by the world’s largest companies for overpayment prevention, fraud detection, vendor management, reporting and analytics. The selection was based on ease of use and on the strong recommendations received from other large global corporations. Just 90 days after a decision was made, the solution was ready to go live.

The company now has effective duplicate prevention controls that protect disbursements globally. Among the impactful outcomes: