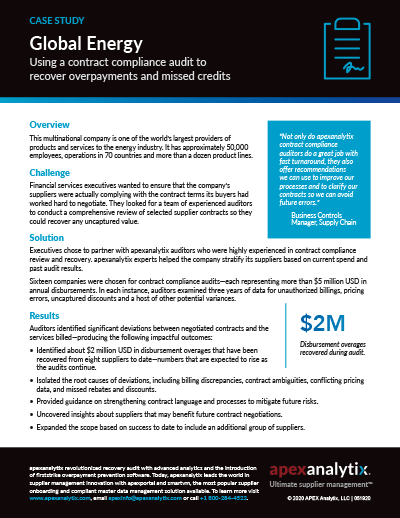 This multinational company is one of the world’s largest providers of products and services to the energy industry. It has approximately 50,000 employees, operations in 70 countries and more than a dozen product lines.

“Not only do apexanalytix contract compliance auditors do a great job with fast turnaround, they also offer recommendations we can use to improve our processes and to clarify our contracts so we can avoid future errors.”

Financial services executives wanted to ensure that the company’s suppliers were actually complying with the contract terms its buyers had worked hard to negotiate. They looked for a team of experienced auditors to conduct a comprehensive review of selected supplier contracts so they could recover any uncaptured value.

Executives chose to partner with apexanalytix auditors who were highly experienced in contract compliance review and recovery. apexanalytix experts helped the company stratify its suppliers based on current spend and past audit results.

Sixteen companies were chosen for contract compliance audits—each representing more than $5 million USD in annual disbursements. In each instance, auditors examined three years of data for unauthorized billings, pricing errors, uncaptured discounts and a host of other potential variances.