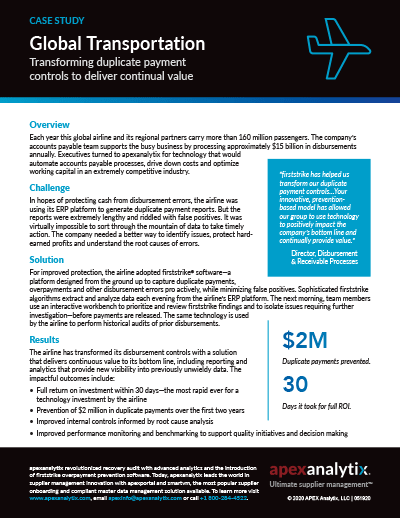 Each year this global airline and its regional partners carry more than 160 million passengers. The company’s accounts payable team supports the busy business by processing approximately $15 billion in disbursements annually. Executives turned to apexanalytix for technology that would automate accounts payable processes, drive down costs and optimize working capital in an extremely competitive industry.

"firststrike has helped us transform our duplicate payment controls. Your innovative, prevention-based model has allowed our group to use technology to positively impact the company’s bottom line and continually provide value."

In hopes of protecting cash from disbursement errors, the airline was using its ERP platform to generate duplicate payment reports. But the reports were extremely lengthy and riddled with false positives. It was virtually impossible to sort through the mountain of data to take timely action. The company needed a better way to identify issues, protect hard-earned profits and understand the root causes of errors.

For improved protection, the airline adopted apexanalytix firststrike® software—a platform designed from the ground up to capture duplicate payments, overpayments and other disbursement errors pro actively, while minimizing false positives. Sophisticated firststrike algorithms extract and analyze data each evening from the airline’s ERP platform. The next morning, team members use an interactive workbench to prioritize and review firststrike findings and to isolate issues requiring further investigation—before payments are released. The same technology is used by the airline to perform historical audits of prior disbursements.

The airline has transformed its disbursement controls with a solution that delivers continuous value to its bottom line, including reporting and analytics that provide new visibility into previously unwieldy data. The impactful outcomes include: