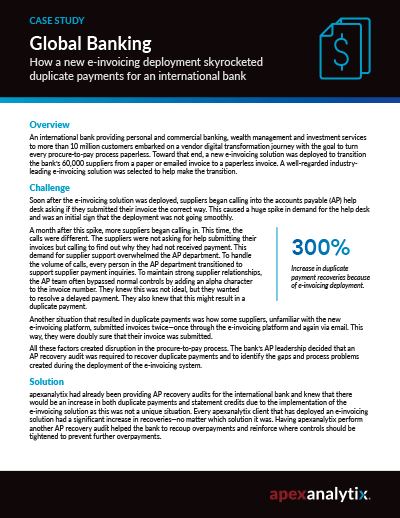 An international bank providing personal and commercial banking, wealth management and investment services to more than 10 million customers embarked on a vendor digital transformation journey with the goal to turn every procure-to-pay process paperless. Toward that end, a new e-invoicing solution was deployed to transition the bank’s 60,000 suppliers from a paper or emailed invoice to a paperless invoice. A well-regarded industry-leading e-invoicing solution was selected to help make the transition.

Soon after the e-invoicing solution was deployed, suppliers began calling into the accounts payable (AP) help desk asking if they submitted their invoice the correct way. This caused a huge spike in demand for the help desk and was an initial sign that the deployment was not going smoothly.

A month after this spike, more suppliers began calling in. This time, the calls were different. The suppliers were not asking for help submitting their invoices but calling to find out why they had not received payment. This demand for supplier support overwhelmed the AP department. To handle the volume of calls, every person in the AP department transitioned to support supplier payment inquiries. To maintain strong supplier relationships, the AP team often bypassed normal controls by adding an alpha character to the invoice number. They knew this was not ideal, but they wanted to resolve a delayed payment. They also knew that this might result in a duplicate payment.

Another situation that resulted in duplicate payments was how some suppliers, unfamiliar with the new e-invoicing platform, submitted invoices twice—once through the e-invoicing platform and again via email. This way, they were doubly sure that their invoice was submitted.

All these factors created disruption in the procure-to-pay process. The bank’s AP leadership decided that an AP recovery audit was required to recover duplicate payments and to identify the gaps and process problems created during the deployment of the e-invoicing system.

apexanalytix had already been providing AP recovery audits for the international bank and knew that there would be an increase in both duplicate payments and statement credits due to the implementation of the e-invoicing solution as this was not a unique situation. Every apexanalytix client that has deployed an e-invoicing solution had a significant increase in recoveries—no matter which solution it was. Having apexanalytix perform another AP recovery audit helped the bank to recoup overpayments and reinforce where controls should be tightened to prevent further overpayments.